During the waning days of the Akkadian empire Ur-Bau of Lagash enjoyed prosperity and independence. When he died in 2144 BC his son-in law Gudea succeeded him as Ensi of Lagash. Gudea reigned from 2144-2124 BC during the time of the Gutian terror but was able to continue Lagash’s independence most likely through statesmanship, paying tribute to the Gutians and by having a massive army. He exerted influence throughout all of the Sumerian city-states although he did not claim to be the ‘King of Sumer.’ 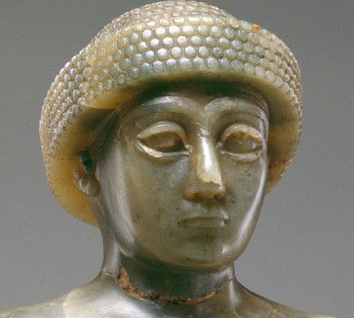 Gudea’s appearance is known today because of numerous statues depicting him with unprecedented lifelike realism. They show him wearing a simple Shepard’s hat not a crown. Most of his his inscriptions describe his vast program of building temples and irrigation canals and his devotion to his personal god, Ningishzida (‘Lord of the Tree of Life’) and to Ningirsu the god of war who was the patron Deity of Lagash.

There are over two dozen statues of Gudea recovered from Lagash, Girsu and other Sumerian cities which are humorously referred to as ‘Little Gudeas’ due to their small size typically only 18 inches tall. 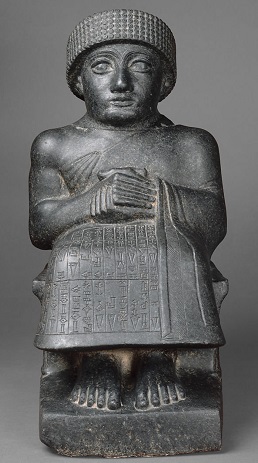 Inscriptions mention temples built by Gudea in Ur, Nippur, Adab, Uruk and Bad-Tibira which shows he greatly influenced all of Sumer.

In spite of Gutian dominance Gudea maintained trade with the entire ‘civilized’ world; Egypt, Anatolia (Turkey), Dilmun (Bahrain) and Lebanon. In one inscription, Gudea referred to the Meluhhans (thought to be from the Indus Valley Civilization) who came to Sumer to sell gold dust and carnelian. 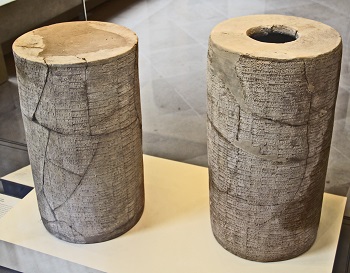 The Gudea cylinders are the longest known Sumerian literary work, close to fourteen hundred lines, which commemorates the rebuilding of Lagash’s main temple, the Eninnu. Presenting himself with piety and humility he initiated social reforms including the cancellation of debts.  The cylinders state he “gave not the waif (over to the rich man,) gave not the widow over to (the powerful) man.” In Sumerian this was nig-si-sa (‘thing’ + ‘straight’) interpreted as justice or fairness.

The 20 years of Gudea’s reign are all known by name with most of the year names being about the building of temples and irrigation canals. But Year 6 was called the “Year when Anshan was smitten with weapons.” Gudea must have been a formidable military leader to ‘smite’ Anshan since this would have been a major military campaign; Anshan is deep within the Zagros Mountains well into Elam. Gudea likely maintained his 20 years of ‘peace and prosperity’ through military means.

Gudea was followed by his son, Ur-Ningirsu and then his grandson Ugme who between them ruled less than a decade. But it was Utu-Hegal of Erech who succeeded in breaking the Gutian yoke to bring kingship back to Sumer. Utu-Hegal’s victory over the Gutians is the subject of a poem where he denounces them and describes the Gutian King Tirigan after being captured and brought before Utu-Hegal:

About 2112 BC, after only some seven years of rule, Utu-Hegal died while inspecting a dam and was succeeded by his son-in-law Ur-Nammu of Ur; Ur-Nammu ruled for 18 years and proved himself to be a very capable military leader, a great builder and an outstanding administrator.

Ur-Nammu’s law code is the oldest law code in history of which we have a copy of. This code provides for many punishments to be paid in silver and is far less harsh than Hammurabi’s Code (‘an eye for an eye’) written 300 years later. Two of his year names are called ‘Year in which Ur-Nammu the king put in order the ways from below to above’ and ‘Year Ur-Nammu made justice in the land.’

He built the great Ziggurat of Ur for the moon goddess Nanna, the divine patron of his city state. The ziggurat is nearly 100 foot tall and still stands today! The ziggurat was renovated by the Neo-Babylonians around 600 BC and again in modern times by Saddam Hussain.

Ur-Nammu died in battle in 2094 BC, likely against the Gutians, and an inscription states ‘he had been abandoned in the battlefield like a crushed vessel.’

Image to the right is Ur-Nammu and the Supreme God Enlil with the Tree of Life between them. Enlil is holding the ‘Rod and Ring’ which is a surveying device. Note that Ur-Nammu is wearing the Sumerian crown, a Shepard’s Hat, and he is also sporting a long heavy beard. The real life Ur-Nammu was clean shaven and perhaps here is represented with a beard to show respect or to emulate Enlil.

Ur-Nammu was succeeded by his son Shulgi who ruled for 48 years. Shulgi was born to rule, not only was his father Ur-Nammu but his mother was a daughter of Utu-Hengal of Uruk, the mighty king who drove the Gutians from Sumer. We have year names for all of his rule and they and they are full of war and conquests; one year name makes the astonishing statement: ‘Simurrum and Lullubum were destroyed for the ninth time.’ Another says ‘The king made a round trip between Ur and Nippur in one day’ a distance of 100 miles which would make him the first ultra-marathon runner! 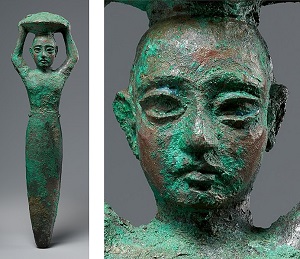 Shulgi greatly expanded his territory during his long reign using not only military might but also through diplomatic means. He seems to have had close ties with Elam and said he spoke their language. He married one of his daughters, Liwir-Mitashu, to the King of Marhashi, thought to be in Elam, and married another one of his daughters to the governor of Anshan in Elam. Shulgi’s own wife was the daughter of the King of Mari far to the North of Sumer.

A strong argument can be made that Shulgi was the greatest of all of the Sumerian king. While the competition for that title would be stiff Shulgi was a strong king and his accomplishments were many. He was a mighty warrior who reorganized the military into specialized units, a priest who declared himself a living God. He was an intellectual who spoke several languages, a writer and also played musical instruments. He must have also have been one of the greatest athletes of his day having run from Ur and Nippur in a single day!

He made reforms to the “tablet house” (Eduba) for scribes and literacy increased throughout his reign. He maintained the cities and canals, improved roads. It was during his reign that the first inns appeared – travelers and traders no longer had to pitch a tent during their travels. He introduced a national calendar and standardized weights and measures to ensure honest trade. He also reverted back to using his native language Sumerian for all written documents. 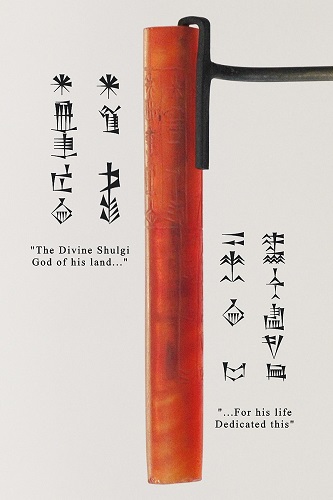 One highly controversial policy was taxing the temples; this made him most unpopular with the priests and likely is the reason why, in later times, he was the target of criticism. Statements appeared in the Babylonian Chronicles, written some 1300 years later, such as ‘he had criminal tendencies and the property of Esaglia and Babylon he took away as booty’ and he ‘composed untruthful stele, insolent writings, concerning the rites of purification for the gods, and left them to posterity.’ Obviously someone was quite upset with some of Shulgi’s policies.

Towards the end of Shulgi’s rule he was increasingly troubled by incursions from Martu (meaning ‘West’), the people we know today as the Amorites from the Levant. He built a wall over 150 miles long to reinforce his kingdom but this was only partially successful.

Ibbi-Sin (2028–2004 BC) was the last king of the Third Dynasty of Ur and by the end of his reign the once vast kingdom was reduced to only the city of Ur. Sumer was under constant attacks by the Amorites who conquered the city-states of Isin, Larsa, Eshnunna, and Kish. Though they were from the Levant the Amorites were not Hebrews having been the inhabitants of Canaan at the time of Joshua’s invasion and conquest of Canaan. The Amorites would go on to establish the Babylonian Empire.

The end of Sumer arrived in 2004 BC when the eternal enemy of the Sumerians, Elam, captured Ur and took Ibbi-Sin away in fetters. The destruction of the ancient city-state of Urim is the subject of The lament for Sumer and Urim, a poem written in the final days of Ibbi-Sin. 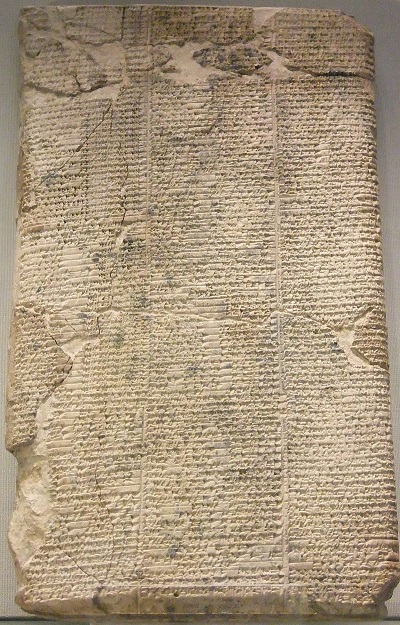 The Lament for Ur on display at the Louvre Paris