The city of Kish was founded by Sumerians likely during the Jemdet Nasr Period about 3200 BC. This seemed to change after The Flood since the Sumerian King’s List has about half of the Kings after the Flood having Semitic names. This indicates a migration of Semitic people from the Levant – modern day Palestine, Syria, Jordan and Lebanon – into the region.

Kish was located on the northern boundary of Sumer. While these people of Kish were not Sumerian it would be difficult to entirely separate the two; there was enormous cultural assimilation in their languages, trade and religion and no doubt inter-marriages. And while they shared the same culture there were differences as well. The people of Kish worn long hair and beards unlike the Sumerians who shaved their face and heads. And the Sumerians wore long robes from their waist to their ankles and the men of Kish worn angled skirts to their knees. Kish spoke a Semitic language while the Sumerian language was completely unrelated to any known language.

The title ‘King of Kish’ came to mean ‘King of Kings’ – a King who rules not only Kish but all the Sumerian city-states. One of the giants in early Sumerian archaeology, Noah Kramer, wrote in his book The Sumerians “The first ruler of Sumer, whose deeds are recorded, if only in the briefest kind of statement, is a king by the name of Etana of Kish, who may have come to the throne quite early in the third millennium BC. In the King List he is described as he who stabilized all the lands”

At the end of the Early Dynastic period, 2350 BC, a man came to power in Kish. We don’t know his birth name but he called himself Sarru-Kin loosely meaning ‘True King’ (‘Sarru’ meaning ‘King’ and Kinum meaning ‘to establish, to confirm.’) We do not know where he was born though he is said to have built a city called Agade on the west bank of the central part of the Euphrates River and that region came to be known as Akkad. Today we call him Sargon due to a single reference in the Old Testament (Isaiah 20) where the Hebrews referred to a king of the same name, the Assyrian King Sargon II, who reigned 1600 years later.

Several versions of the Sumerian King’s List has Sarru-Kin as the son of a gardener and the cup-bearer to the King of Kish, Ur-Zababa:

In Agade, Sargon, whose father was a gardener, the cupbearer of Ur-Zababa,
became king, the king of Agade, who built Agade; he ruled for 56 years.”

Later tablets give detailed accounts of Sarru-Kin’s life based to some degree on historical facts yet greatly embellished. According to these accounts Sarru-Kin was the cup-bearer to a Semite king of Kish, Ur Zababa. Kish is invaded by the Sumerian King Lugalzaggisi of Uruk who had already conquered all the other Sumerian city-states. Ur Zababa sends his cup-bearer to negotiate with the invading Sumerian King but he betrays his King and joins the Sumerian king to conquer Kish. After Ur-Zababa is out of the way Sarru-Kin next betrayed his benefactor Lugalzaggisi and thereby became the ruler of Kish and all of Sumer. In a grand act of humiliation Sarru-Kin marches the Sumerian King Lugalzaggisi in a neck stock through the Gate of Enlil in Nippur to show the world Enlil no longer loves Lugalzaggisi. 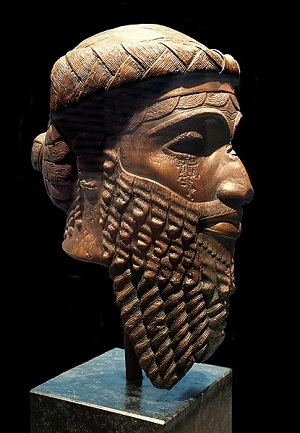 It was common for a conquering king to replace a conquered king with another Sumerian king who would be a vassal king, but a Sumerian never the less. But when Sarru-Kin conquered a city he would replace the King, the entire city’s administration and the temple priests with Akkadians as well as station Akkadian troops in the city. The Sumerian city-states found themselves governed by ‘foreigners.’

Sarru-Kin was an effective administrator and he did continue the Sumerian progress but with a different flavor. During his reign his Semitic language, Akkadian, became the dominant language in all of the Mid-East; many of the Sumerian tablets were rewritten in Akkadian. The Babylonian, Arabic, Hebrew and Aramaic languages are all variations of the Akkadian language. Sarru-Kin ruled from 2334 to 2279 BC.

Sarru-Kin’s son and successor, Rimush, was an especially blood thirsty King. When his father died many city-states revolted and Rimush retaliated by inflicting large scale destruction across Sumer; the cities of Ur, Umma, Adab and Lagash were destroyed. Rimush bragged about his great accomplishments by posting his death count on Victory Steles. By his count he killed 56,000, captured/enslaved 29,000 and expelled/annihilated 25,000. Rimush ruled for only nine years after which Sarru-Kin’s other son, Manishtusu ruled for fifteen years.

Though both Rimush and Manishtusu held the empire together it is generally acknowledged that the height of the Akkadian Empire was under Sargon’s grandson, Naram-Sin who expanded the empire beyond even that of his grand-father.

It was under Naram-Sin’s son, Shar-Kali-Sharri, that the Akkadian empire fell apart. During a great drought the fiercely independent Sumerian city-states along with Elam to the East, the Amorites in the West and the Gutians in the North all rose together. When Shar-Kali-Sharri died in 2193 BC this ended the 150 year rule of the Akkadian empire. There is little doubt that the subjects of the Akkadian Empire harbored an intense hatred towards their rulers. The city of Agade was completely destroyed and not a trace of it can be found today.

While Sarru-Kin was a ruthless power hungry man history has been kind to him. A thousand years after his death the Assyrian Empire revered him as the epitome of a ruler, someone every King should emulate. 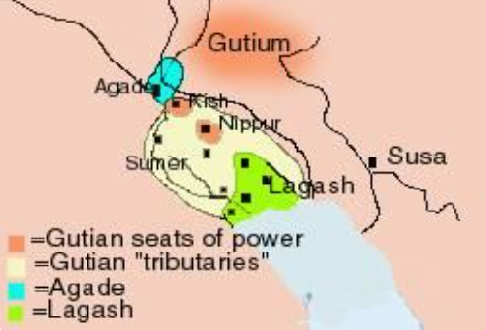 After the fall of the Akkadian Empire, about 2154 BC, a barbaric tribe from the Northern Zagros Mountains, the Gutians, appear to have become the dominant power in the region but their only interest was the spoils of war. They were a nomadic tribe from the North East in the area of modern day Mosul, Iraq. For the Gutians to conquer the Akkadians they must have had a massive army of hundreds of thousands of fighters because the Akkadians had ruled all of Mesopotamia for well over a hundred years and they were firmly in control.  The Gutian’s primary tactic was ‘hit and run.’ They would invade a city, kill many and loot all the treasure and then flee. With the fall of Akkad, and the terror of the Gutians, temples were destroyed, records were not kept, irrigation canals were not maintained and crops were not planted.

The Gutians had no regard to the culture of the Sumerians and under their rule a great darkness fell over Sumer; a time of anarchy in which no King was able to exert dominance. About this period The Sumerian King’s Lists says:

“Then who was king? Who was not the king?
Igigi, Imi, Nanum, Ilulu:
four of them ruled for only 3 years.”

However, even under these worst of times there were Sumerian cities which managed to maintain some degree of independence and self-rule. One of the greatest Sumerian Kings, Gudea, reigned in Lagash during the Gutian terror. It is likely that Gudea paid tribute to the Gutians to leave Lagash alone since they only wanted the treasure and had no interest in living in cities or ruling an empire.