While some Sumerian chronologies do not include the Jemdet Nasr period it represents what is likely the most important point in the history of civilization. During this period the Sumerians made ground breaking advancements in urbanization, centralized management, writing, mathematics and so much more. In addition, this point in time shows the earliest development in Egypt – the pre-dynastic period called Dynasty 0. In India, this period shows early signs of the Indus Valley Civilization. While the Sumerians appear to be the ‘first’,’ at 3000 BC we have simultaneous rise of three great civilizations all developing mostly independently of the others and reflecting cultural advances within their own distinctly different cultures.

It was during the Jemdet Nasr period that Sumer started modifying tokens in order to convey more information. Quantity was specified by marks on the token along with a pictograph which specified the commodity. Tokens went from different shapes to a tablet. 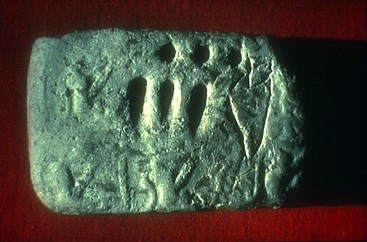 This represents a significant step forward in the development of writing – from token to tablet. The symbol on this tablet is a pictogram for a jar of oil, the 3 dots each mean 10 and the wedges each represent 1.

This tablet would be read: 33 jars of oil.

During the excavation of Uruk some 5,000 tablets were recovered which showed the earliest sample of the cuneiform texts. These tablets were from a rubbish pile! Just as with paper today when a receipt or a document has outlived it’s usefulness is its simply thrown away. While precise dating of these tablets is not possible they have been linked to the Jemdet Nasr period based upon their content and style of writing. The tablets include administrative records dealing with personnel, fields, animals, textiles, and food. Many of the tablets bear a particular city’s seal impressions. 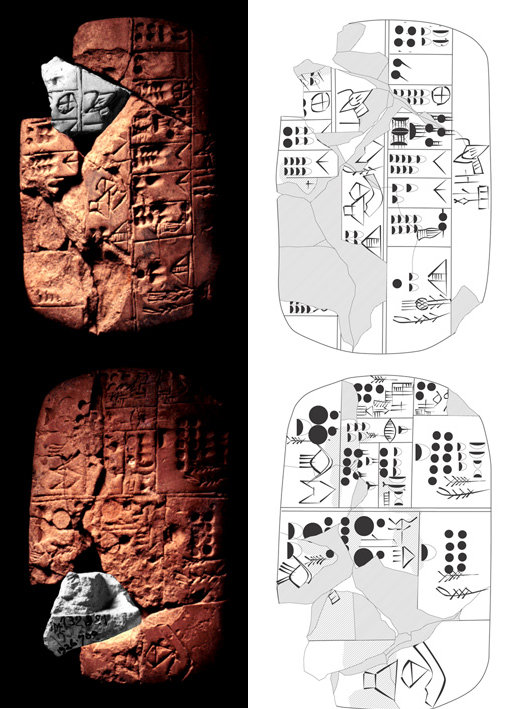 This is a complex receipt – it shows a quantity of grain being delivered as a  ‘regular offerings due to the temple’ taking place six times a year.

Another area of the tablet has a list of 12 commodities delivered 12 times and names the two officials in charge of the transaction.

Still other sections give an accounting of all grain received over a 4 year and a 6 year period. All this on a clay tablet which measures 4.5 inches by 2.8 inches!

It is a little disappointing to realize that writing was developed to support trade. Today the written word is used to express ideas, ambitions, fantasies, to record events and to express emotion and so much more. But in the ancient world it was first things first; let’s get an accurate accounting of those 15 sheep and 7 jars of oil I sent to Girsu!

The development of trading tokens expanded to include stamps, and than cylinders. A stamp was a piece of stone which had a pictograph craved on it representing a city, a temple or individual. A stamp would be added to a tablet to identify the party sending the commodity. The idea of a stamp to identify an individual can be seen in the fairly recent European medieval period where the king would have a Signet Ring and stamp hot wax with his ring in order to seal a document.

Cylinder seals added yet more content. From 1 to 4 inches in length the cylinder was engraved on stone with a motif which represented the owner. Motifs changed over time and different locations but one particular seal represented an individual or an institution, a King, a temple or priest. Cylinders seals became so common in Sumer that even slaves had them! They were likely the first form of identification.

Sumerians continued to develop pictographs for person places and things until they had over a thousand pictographs in use. Still needing more, they reused the pictographs until each one could be read as any one of up 6 different things. This added a significant layer of complexity to reading the script – now you had to know the context of the tablet in order to translate it properly. Here is a diagram of some of the more common early pictographic signs:

Since numbers are so important to trade of course the Sumerians paid attention to that. They used a crazy base 60 system for counting, and they combined it with a base 10 system which was only used on certain products. Below you can see how the notation of numbers changed over time:

The sexadecimal system the Sumerians developed still lives with us today. The 360º in a circle and 24 hours in a day are direct Sumerian contributions to our own 21st century culture.

These early symbols were based on pictographs (pictures which resemble what they signify) and ideograms (symbols which represent ideas). The next step towards true writing was to have a symbol represent a syllable. This happened during the Jemdet Nasr period 3200–3000 BC. A large collection of these tablets were excavated in Uruk.

Denise Schmandt-Besserat of the University of Texas has written an excellent article which discusses this transition to syllabic writing:

Adding phonographs on top of the already complex pictographs made translating the tablets even more difficult. The Sumerians did not use any punctuation so a reader had no way to know when one word ended and the next one begun. A line of cuneiform symbols could be any possible combination of any possible words or syllables. Schools were established, called e-dubba (tablet house), to train scribes in translating the script. Scribes became an important part of society, they were literate and were trained in astronomy, mathematics, medicine and every aspect of Sumerian knowledge. To learn to read and write was no small thing. King Ashurbanipal of Assyria who reigned 668 to 627 BC boasted in one tablet;

And this is no idle boast, there are tablets which are signed ‘Ashurbanipal, King of Assyria!’ Scribes would sign their tablets just as today an author puts his name on his book; tablets can be dated to a particular time period based upon the name of the scribe who wrote it!

This advancement allowed the Sumerians to move beyond accounting transactions – they started creating literary texts. Kings were eager to record their exploits about subjugating nations, the construction of temples, establishing codes of law and even what we call today mythological texts. Nearly all the tablets we have today are about business transactions but about 3% of them give us details about the Sumerians, their life and their poems. They have epics which mythologize ancient Kings, the creation of the world, the great flood and descending down to the underworld!