In the early 1800s European archaeologists went to dig in the sands of Iraq to prove the veracity of the Bible. They sought to find actual artifacts proving the existence of King Solomon, the City of David, Abraham and YHW. They were successful but in unexpected ways.

Excavating the ancient city of Uruk, in the southernmost part of modern day Iraq, archaeologist uncovered a number of clay tablets written in the cuneiform script used throughout the region for 3000 years that, when translated, seemed to be in an unknown language. They knew how to read the cuneiform script in Assyrian, Babylonian and Akkadian but these tablets were none of those languages. The eventual decipherment of these tablets revealed an unknown tongue that was far older than the Akkadian records – Ki-En-Gi had been discovered by the Europeans. Today we know them as the Sumerians.

Ki-En-Gi existed from approximately 3500 BC until it’s final destruction in 2004 BC. All the contemporaneous cultures as well as the follow on cultures had immense respect for the black headed people. These cultures, the Akkadians, Babylonians and Assyrians adopted the Sumerian cuneiform script for writing, worshiped the Sumerian Gods and incorporated all the many developments the Sumerians pioneered into their own culture. The Sumerians were the foundation of all the Mesopotamian cultures for 3000 years. They are credited with the invention of writing, libraries, the wheel, cities, Kingship, centralized government, the pottery wheel, the plow, the use of copper, time keeping, the lunar calendar, law codes, board games, mathematics and perhaps even the sailboat. Since the Sumerians invented and developed writing they had the first opportunity to make a record of all these ground breaking advancements – it’s easy to be ‘the first’ if you have the first system of writing!

Their land, Ki-En-Gi, made such tremendous progress that the entire region is known as the ‘Cradle of Civilization’ because their advancements produced follow-on cultures which continued to expand and innovate on their achievements. It is also known as the ‘Fertile Crescent’ because of their use of sophisticated irrigation systems which greatly expanded their agricultural production.  In a more general way we know of this area by the ancient Greek term ‘Mesopotamia’ meaning ‘between the rivers.’ However, the term Mesopotamia may refer to any one of civilizations which developed in the region over 5000 years. Our interest is primarily the blacked headed people, specifically the time range 3500-2004 BC and while this begins in the Late Uruk period it is worthwhile to take a brief look at the preceding time periods, the Ubaid and Early Uruk. 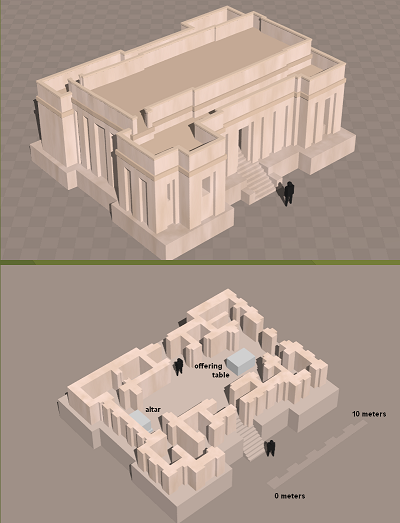 During the Period 5000-4000 BC the movement towards urbanization began-the earliest known city is Eridu. There was a large central building, government or temple, on approximately 40 acres of land which was surrounded by half acre lots with multi-roomed rectangular homes. All were constructed from mud bricks. Since there were no walls around the city there apparently was little threat from attack.

We have limited knowledge of these people; they may have been the black headed people or they may have been a different race altogether. But, their influence was widespread – from Eridu in the southernmost part of Mesopotamia stretching as far north as Anatolia (modern day Turkey) they show the earliest known example of irrigation and their artifacts include distinctive clay pots, the plow and clay sickles. They did not have any form of writing so we only know of the Ubaid period from pottery, some figurines and stamps.

Early in the Ubaid period, sometime around 6000 BC, the earliest form of irrigation is found at modern day Choga Mami, a city on the Iraqi border with Iran. Excavations at Chogi Mami reveal a cluster of mud brick building, along with a watchtower and 2 man-made canals, little more than ditches, running on either side of the settlement. These canals were 3 miles long and carried fresh water from a nearby river to the settlement. These primitive canals provided fresh water to the village and to their fields in which they grew wheat and barley. Thousands of years later the Sumerians would turn this idea into a sophisticated system of locks, canals, dams and sluice gates which transitioned the great civilized land from an wasteland into a land of plenty; perhaps the Sumerians greatest asset was their abundance of food.

Just as the Sumerians were not the very first to use irrigation, they were not the first to use simple trading tokens. Tokens were in use throughout the entire Mid-East as early as 7000 BC. The earliest form of communication wasn’t writing at all, it was a clay object in a particular shape with the shape representing an object, for example a jar of oil, a sheep or goat, grain, beer or a day of work. On the left below the cone shaped clay object represents a measure of cereal and different sizes of the cone would represent different measures of the cereal. The pyramid shaped token represents a unit of work.

The Kish Tablet represents a transitional phase toward the partly syllabic writing of the cuneiform script. There is no translation for this tablet but you can see the signs for hand (give), foot (go) and vertical lines meaning the number 1.

The earliest known record of Sumer dates to approximately 3500 BC, the division between early and late Uruk periods. It would be wrong to think of Sumer as a country, it was closer to the ancient Greek city-states. A collection of cities founded by the same ethnic people, speaking the same language, worshiping the same gods and trading among themselves. It was not a ‘unified’ country or even a federation of cities.

The entire region we refer to as ‘Sumer’ is only some 120 miles long stretching from the Persian Gulf to modern day city of Baghdad. It was located ‘between the rivers’ of the Euphrates and Tigris rivers. Their domain stretched eastward toward Elam with it’s capital city Susa and the Zagros Mountains – modern day Iran. The earliest cities include Eridu, Ur, Uruk, Lagash, Nippur and Kish. Today, all that is visible of these early cities are large mounds of crumbled mud-bricks from their ziggurats which originally rose some 200 feet.

Sumer’s only natural resource was mud and clay. They traded their their grain and livestock for wood, stone, silver, gold and precious gems. Each city was ‘ruled’ by a god and their rule was administered by a priest-king (ensi). The temple extracted taxes from the population and amassed great wealth. This was the foundation for the rise of kingship although in Sumer the King always retained the function of a priest and administered justice based upon the will of their city’s God. A Sumerian would worship a personal God as well as the God of the city he lived in.

Typically there would be a wall around the city and the center of the city would be a ziggurat – a tiered pyramid-like building dedicated to that city’s god and run by priests. The largest of their cities was Uruk which at its peak had a population exceeding 40,000 people. Extensive irrigation canals allowed the cities to thrive.